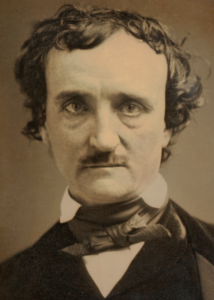 The opera we’ve created is based on a short story by Edgar Allan Poe, yet it is clearly in the genre of opera buffa or comic operetta. What’s that, you may well ask yourself. A comic opera based on Edgar Allen Poe? Yes, it was a challenge but, by no means, an impossibility. It turns out Poe did write a few humorous stories among his many grisly ones. This particular one is called Some Words with a Mummy.

In the story, an adventurous fellow in Poe’s time and place (Baltimore, 1850) gets a message from a colleague, inviting him to come and view a genuine ancient mummy.

The narrator arrives at the home of Dr. Ponnanner, the owner of the mummy, and is joined by two other colleagues. After a good bit of poking and prodding, they see the mummy come alive, after which a number of hi-jinks take place.

The most important thing they learn—particularly the narrator, who is captivated by the notion—is that the strange creature could be mummified alive, then pick up, right where he left off in ancient times, once he is awakened.

The upshot of the tale is that the narrator determines to have this done on himself, so that he may be alive, well into the future. 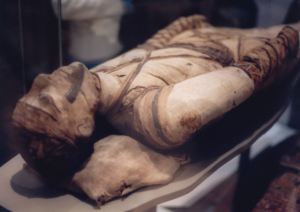 Fair warning for those who would rather read the tale from the old master himself, rather than entrust it to a couple of 21st Century punks, the story will almost certainly not touch or otherwise molest your funny-bone. Tales of terror were Poe’s considerable strength, but he may not have been entirely comfortable writing a comedy. It is only comical when compared to such as pits, pendulums, and homicidal simians. Much of the tale is filled with scientific and pseudo-scientific mumbo-jumbo, which would very probably cause your eyes to glaze over and your attention wanders to the landscape of the planet Neptune if we were to present the opera as a literal transcription of the story.

To combat such a condition, we have taken outlandish liberties with the tale, to the point where we can only say the work is “based on” Some Words with a Mummy. But that is not a bad thing. Rather, it is a zany thing, as you will come to find out. If you like a farce, then you have come to the right place. 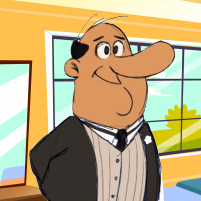